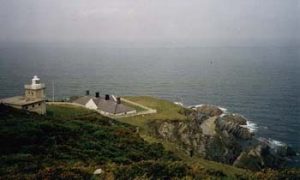 From the entrance to the car park at Mortehoe, follow the sign, “Lighthouse, Lee.” After a short distance the HM Coastguard Station will appear on the left followed by a sign marked Rockham Bay, continue on until arriving at a white painted gate, which is the entrance of the access road leading to Bull Point Lighthouse. (marked on signpost) Go through the side gate and continue along this road. A finger post will be found on the right hand side indicating an alternative route to Bennett’s Mouth and Lee. At this point the alternative route winds down across the hillside and eventually reaches the bottom of the valley, it then heads towards the sea. This is a pretty walk as it runs alongside a small stream, the banks of which abound with wild Daffodils and Primroses in the spring.

If the walker chooses to ignore this detour and continue along the road to the lighthouse, views to the left open up showing Lundy Island and Morte Point. Off the point at low tide will be seen the legendry Morte Stone. The sight of many a Ship Wreck. Soon, a low white topped wall will appear with another finger post marked “Lee, Bennett’s Mouth, Alternative Route” This path again runs to the valley floor. Continuing on the road pass through yet another white painted gate. Just after passing through gate a comfortable resting place will be found!!

Arriving at the lighthouse gate turn right and follow the sign “Coast Path to Lee one and a half miles” Follow the boundary and continue climbing for 100yds, the ground then levels where once again there extensive views. The path then descends into Bennett’s Mouth; care should be taken as the path can become slippery in wet conditions.

The pretty cove, abounding with rock pools, is an ideal stopping point for a rest and a bite to eat or drink (providing you have brought your own victuals) Having crossed the wooden bridge follow the steep path, about three quarters of the way up will be found a convenient wooden seat, should one be required!! Carry on over the top and continue down the other side to yet another cove, named Hillymouth. Cross the two stiles and wooden bridge over the small stream, again the area abounding with Primroses in the spring. There is an interesting notice attached to one of the stiles regarding Access Land. To Quote

“ This coastal grassland is within North Devon’s Area of Outstanding Beauty and is defined as Heritage Coast. The open access area is traditionally managed by grazing without the use of fertilisers or herbicide. Gorse is being cut on a ten-year rotation to diversify its age structure. Stonewall and earth banks are also being restored. The prehistoric standing stones evident on the site are designated as a Scheduled Ancient Monument”

Continue the walk by following the fence for 200yds. At this point a decision may be made as to how to continue. One way is to continue on the path, which begins to steepen and surmount the steps until the ground levels, at this point continue straight on, descend some stone steps and go through the small wooden gate and into the lane, turn left and descend the hill into Lee.

The alternative path, and this must only be undertaken when the tide is low is to cross the stile and descend 85 steps onto the beach called Sandy Cove. Cross theSandybay beach and at the far end keep close to the foot of the cliff. At this point a series of steps will be found hewn in the rocks. Follow these steps taking great care, as they can be very slippery. Rock pools can be found on either side in places. Eventually after a short distance they terminate in a sandy gut. Follow this and you will find yourself on the beach at Lee