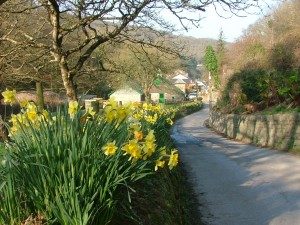 A WALK THROUGH LEE

On the north coast of Devon between the holiday resort of Ilfracombe and Bull Point Lighthouse, strung out along and venturing up the slopes of a narrow wooded valley, lays the village of Lee which has an interesting History. A small stream runs along the length of the valley, rising on the hillside behind Lincombe. It is quickly swollen by small streams from the Shaftesborough and Borough valleys and innumerable springs, some of which flow only after strong winds, or after the rocks have been squeezed, as the locals say.

The west side of the valley is thickly wooded, as are the Borough and Shaftesborough valleys, which branch off on that side. The timber is mostly scrub oak, sycamore, ash, elm and fir, with a sprinkling of beech and chestnut.

Nine or ten years ago, the Forestry Commission planted parts of the Borough and Shaftesborough valley with conifer; these trees are now fifteen to twenty feet high. Rhododendrons abound, and must grow almost as thick and dense as they do in their natural habitat, in spite of the soil, which is very shallow on the hillsides. As if to prove this, great knuckles of rock thrust up through this thin covering.

These rocks are the Morte Slates, which run in a narrow band from Morte Point across Devon to Somerset. They form the high cliffs to the west of Lee, and have torn many a stout ship apart on the cruel reef of the aptly named Morte Point. The Morte Slates continue a little way along the coast to the east of Lee before the rocks of the Ilfracombe beds succeed them to form the magnificent cliff scenery of Lee Downs and the Torrs

In 1829 it was felt that a church should be provided for the hamlet of Warcombe, there being a population of about 200 in the area. The church building began in 1833 on land given by Mr. Z. H. Drake. The architect was Mr. Hayward of Exeter. On St Matthew’s Day, 21 September, 1835, the building was dedicated and consecrated by the Bishop of Exeter, Henry Philipots, as a Chapel of Ease in the Parish of Ilfracombe. As already mentioned it became the Parish Church in 1869. When the Ecclesiastical Parish of Lee was formed it encompassed some 1648 acres, of which about 233 are situated in the Civil Parish of Mortehoe.

The Church is an example of a very small early Victorian church is neo-Gothic style, estimated to have cost £300, of which sum £75 was voted by the incorporated society for promoting the building of churches and chapels, on the condition that an endowment was secured. The expenses of building up an endowment of £40 per annum were estimated as £1500. Up to 4 June, 1834 the total amount subscribed was £573. 1 Os.

The woodwork in the Church, including the oak panel pulpit and carved choir gallery is very much older than the building, being of the sixteenth and seventeenth centuries, and is said to have been collected from old buildings in the neighborhood by the squire.

The War Memorial outside the Church was unveiled by Charles Derbyshire, in July 1921. The stone cross cost approximately £150. Of the sixty-four parishioners who fought in the First World War, sixteen died.

The Memorial Hall, one of the best in the district, was bui1t on a site given in 1921 by Mrs Tugwel1, widow of the Rev. George Tugwel1, and is opposite the Church. The foundation stone was laid on 16 August 1923, by Col. R. Longstaff, D.S.C. , J. P. Inside the Hall is a Roll of Honor displayed under the legend- “The following inhabitants of the Parish of Lee, North Devon went forth to serve their King and Country in the Great War of 1914-1918. Over the years the Hall has been home to many differing functions, and has been the focal point for the social life of the village.

During the eighteenth and the beginning of the nineteenth centuries smuggling was carried on extensively along these coasts, and Lee seems to have enjoyed its fair share. Mr. Grahame Farr has done a survey of smuggling in North Devon, and the following reports appear in it: ‘Lee, September 1820; about fifteen hundred gallons brandy and gin reported landed. 7th October 1820; the Clovelly Preventive Crew found one keg of spirit buried in the shingle of the beach at Lee. 20th September 1820; report that Cook of Ilfracombe landed three hundred tubs (about five gallons each) of gin and brandy at Lee, which were carried into the interior.

The first and last reports almost certainly concern the same incident. The smugglers trade would be quite varied, as an earlier report shows: On the 23rd June 1786; three hampers containing sixty six bottles of gin, about thirteen gallons red Portugal wine, about two hundred and fifty. pounds white salt, and one box with seventy three packs playing cards without the ace of spades, seized in the outhouse of John Beer at Lee.