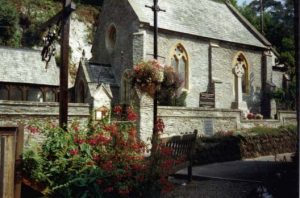 The Parish Church of St. Matthew or, more fully, of St. Matthew and St. Wardrede, was built in 1833-34 during the reign of William IV. It was consecrated by the Bishop as a chapel-of-ease in the Parish of llfracombe on St. Matthew’s day 1835, and became a Parish Church in 1869, when Lee became a separate ecclesiastical parish carved out of the parishes of llfracombe and Mortehoe.
The association with St. Wardrede is of uncertain origin, but the name is of interest in that it may point to an earlier Celtic missionary influence in Lee in the 6th century. “it is not known with certainty who St. Wardrede was” writes Mr. R. Barnes, formerly of the University of Leicester, who has investigated the matter. He “believes that he was a Celtic Saint, whose name is embodied in the Cornish name ” Tywardreath ” and that the Champernowne family, who were the lords of Tywardreath, as well as patrons of Ilfracombe, were probably responsible for the dedication.” Like many other Celtic Saints he may have been known or remembered anonymously and simply as “Saint”= the holy man, “war”= on or near, “drede”=the beach.
Notable Features
WOOD-WORK. Items of interest, of much greater antiquity than the building itself, include 16th 17th century carved oak panelling, carved choir gallery-front, pulpit, box-pew, front pews and pew ends, carved oak frame to the memorial to Wm. Fisher MacMichael, at one time Vicar of the Parish, and the quaint projecting oak piscina on the north side of the chancel, these Jacobean carvings are said to have been a gift from the squire: see the DRAKE-CUTCLIFFE memorial on the south wall and compare the carved beasts on the choir gallery-front with those on the coat of arms on the memorial. The wooden panel in the small arch (north side of chancel) in the front of the barrel organ formerly in the choir-gallery.
WALL DECORATION. The Victorian wall decorations consist of various Christian emblems, e.g., of our Lord’s sufferings and Crucifixion-nails, sponge, spear, crown of thorns. scourge and chalice: emblems also of the Church-ship or ark of salvation, anchor (emblem of Christian Hope) and several emblems of Christian Saints, e.g., wheel for St. Catherine, grid-iron for St. Laurence, the three money bags for St. Matthew.
THE ORGAN. In the church chest, is a printed notice of a proposed bazaar, “The Lee Bazaar” to be held at the Assembly Rooms, llfracombe, in August, 1854. to procure funds to purchase a small organ for the Chapel of Lee, The singers at Lee are led by a flute and an occasional violoncello and use a tune-book. which is chiefly aboriginal! Another notice of 1866 reads: “It is proposed to remove the barrels from the organ of this church and to add a key-board, pedals and such pipes as are required.” The new organ was officially “opened” in July, 1867. The name of the organ maker was H. Bryceson, 5 Tottenham New Road, London.
SMALL WINDOW (south wall of chancel). The glass is old Italian enamelled glass showing a Rogational scene of blessing the cattle
.RICHARDS MEMORIAL (north wall of nave). This memorial commemorates Martin Richards, the first Parish Clerk. It seems that his father, Hannibal Richards, had been a notorious wrecker and smuggler, first at Morwenstowe, Cornwall, and then at Lee.
MEDIAEVAL CHAPELS. A medieval chapel dedicated to St. Wardrede at one time occupied the site of the present ” Chapel Cottage ” (standing alone on the right of the path to the sea) which was built in 1844 from some of the material from the chapel and enlarged in 1925. Altogether there were four (possibly more) such chapels dependent upon llfracombe Parish Church-at Westercombe, dedicated to the Holy Trinity: at West Hagginton, dedicated to Our Lady: at Lee, dedicated to St. Wardrede: and the well-known chapel dedicated to St. Nicholas on Lantern Hill, The Quay, Ilfracombe. The last two are mentioned in Bishop Stafford’s Register 1416 (in the reign of Henry V), and all four chapels are mentioned in Bishop Lacy’s Register 1439 (in the reign of Henry VI).
ST. WARDREDE’S SCHOOL. The original Church School was a small cottage-like building in the grounds of the new Manor House, below the Manor House and near, “The Gwythers.” This building was left empty and in ruins for many years after the new school was built. The old school was completely demolished in 1967. Outside there used to be a very attractive stone-built stile showing the right of way, but this was removed just before the new Manor House was built. The earliest remaining record in connection with the first school in Lee is a bill dated 1848. The foundation stone of the second Church School was laid in 1859, and the school opened in Easter Week, 1860 Early in 1939 the local education authority decided to close the school owing to the decreasing number of children. However, on the outbreak of the Second World War in the same year the school was opened for use for some time by evacuee children. The school bell is an old ship’s bell inscribed “Ship Europea” Lancaster, 1800. This ship was wrecked off the coast of Lee in 1858.
THE BISHOPS’ STONE. At the N.W. corner of the Memorial Hall (on the left at the entrance to the car park opposite the church) lies the Bishops’ Stone, which was originally to be found in the grounds of Southcliffe (looking down the valley to the sea). Its interest dates from approx. 1833 when it is said that Bishop Henry Phillpotts, the then Bishop of Exeter, used it as a seat from which to watch the Rev. Prebendary Tugwell fly-fishing in the near-by pond. Since then it has been associated with a number of visiting Bishops.
G. KESTELL-CORNISH.