A short walk exploring the fragrances and textures of the village and its gardens.

The village of Lee nestles between steeply wooded hills in a sheltered valley winding down to the rugged North Devon coast. In this sunny, secluded spot all kinds of plants flourish and over the years the gardens have been cultivated to make Lee one of the most attractive villages in the region. The pretty stonework walls form an infinite variety of patterns and textures, softened by the many colourful plants growing over and around them, and especially by the scarlet blossoms of the bushes, which give the village its well-deserved name of Fuchsia Valley.
As well as traditional cottage gardens, and more exotic species like palms, figs and vines, there is an alpine garden on the wall outside the Memorial Hall, an old-fashioned fruit, flower and vegetable garden by the School House, and a fine mature shrubbery around The Grange. But perhaps most delightful of all are the unexpected glimpses of individual gardens through the many lovely little gateways. Look for details of gateposts and steps and features of the cottages themselves, such as porches, windows, roofs and chimneys.
All this is set off by the magnificent coastal scenery; thickly wooded hills, lush meadows, trickling streams and the rocky cove surrounded by rugged cliffs. It is this visual contrast, and the resulting combination of the smells of salt, seaweed and vegetation with the more delicate fragrances of garden plants, which gives Lee a character all of its own. 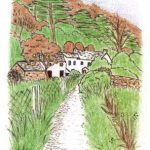 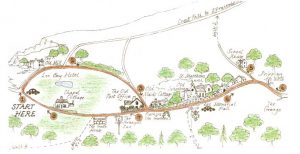 1. Start from the car park near the sea front. Come out of the car park and turn right, following the road alongside the cove and past The Old Mill and The Lee Bay Hotel.
2. Keep straight on, following the road inland towards the village. There are lovely views over the grassy meadows of the valley and the thickly wooded hills beyond. Set amongst trees on the opposite hill is The Manor House. Southcliffe Hall is the large house in the valley just behind the far meadow.
3. Follow the road as it slopes down into the heart of Lee village. The Old Maids’ Cottage with its picturesque thatch is on the left. A short distance further on is the Old Schoolroom, next to St Matthew’s Church.
4. Continue up the lane as it begins to climb gently, passing a small well set in the wall between The Old Vicarage and Rose Cottage. On the opposite side are lovely little meadows with the woods rising beyond.
5. At the ]unction with the lane leading to the Coast Path, make a brief detour left to The School House, from where there are delightful views down over the valley. Then retrace your steps and continue up the road, past the Dripping Well, as far as the entrance to The Grange. This is now devided into apartments. A few yards further up on the right is a lay-by, which was once a stone-breaker’s depot.
6. Retrace your steps back to the village, passing the Memorial Hall, the former Lee Post Office. Now holiday accommodation.
7. At The Old Post Office, take the left-hand fork which is a footpath to Lee Beach, passing between several interesting old houses with lovely gardens. Cross the little footbridge over the stream beside which stands a very old linhay or stone barn. Continue on down the path which runs between meadows in which there are often rare breeds of sheep.
8. After passing Chapel Cottage, carry on down the footpath which runs alongside the gardens of the Lee Bay Hotel to rejoin the car park.

WHAT TO LOOK OUT FOR 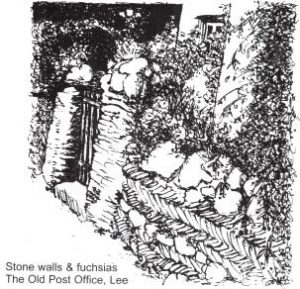 Can you spot the following features?
Herringbone walls
A wrought-iron fuchsia
A ship’s bell
Two dripping wells
Owl, cat and mouse heads on gateposts
A Victorian pillar box
A stone on which seven Bishops sat
A stone -breaker’s depot

Herringbone Walls
In 1871 the village was developed by Mr Robert Smith, the owner of what is now The Grange. His foreman, a local man called John Cousins, put in all the pretty stonework walls with fuchsias growing on them. Lee soon became known worldwide as the Fuchsia Valley and there was even a song written about it. Now, over a hundred years later, the walls still stand and the fuchsia bushes flourish.

The Old Mill (c.1560)
Until the early 1890s this was a working corn mill fed by a leat which ran alongside the road behind the Lee Bay Hotel. The waterwheel was removed at the end of the century and ever since it has been a private residence or tea house. During alterations in 1976 a fine old bread oven was discovered in one of the kitchen walls.

The Old Post Office (c.1706)
In the latter part of the last century this was the village post office. Before 1873 a postman walked from Ilfracombe to Lee via the cliff road and from there on to Mortehoe, Woolacombe and West Down. A telegraph was installed in 1897. On the day Queen Victoria died, during a violent thunderstorm, the postmistress was taking down a telegram telling of the queen’s death when she was struck by lightning in the left eye and blinded. Shortly afterwards the post office was transferred to its present position.

The Old Schoolroom.
The bell above the entrance came from a ship, the Europa Lancaster, which was wrecked off Lee in 1858 and still bears the inscription of the ship’s name and date. The school was built for 48 children and opened in 1860. The schoolmistress received a salary of £20 and a house (School House in the lane above The Grange). The number of children gradually declined until in 1939 the school was closed, though it was used for evacuees during the war. It then fell into disuse until in 1971 the present craft shop was opened

St Matthew’s Church.
Consecrated in 1835, this is a very small Victorian church in neo-gothic style. The carved oak panelling, including that of the pulpit and choir gallery, is much older, probably dating from the 16th century, and is said to have been collected from old buildings in the neighbourhood.

The Gate House.
This was once the carriage house and stables for Southcliffe Hall. Later it was run as the Fuchsia Glen Tea Gardens and all the crockery bore the fuchsia emblem. The gateposts with their animal motifs are the handiwork of the present owner. 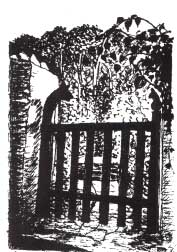 The Old Maids Cottage.
Probably the most photographed building in Lee, this was built as a one-storey cottage about 1653. In the 1870s it was rebuilt by Mr. Robert Smith during his development of the village. It has one of the few thatched roofs to survive; the others were replaced by slates. A poem entitled “A Bird in the Hand” tells of the three pretty young maids who were so choosy about their suitors that they ended “The Three Old Maids of Lee”.

The Grange.
Once the home of Mr. Robert Smith, the developer of Lee as the Fuchsia Valley. He demolished the old thatched farmhouse which stood here until 1871 and built a villa known as The Elms. Subsequent owners extended the building and laid out the grounds. The house was renamed “Miramar” (view of the sea) in 1898. It is now known as The Grange and has been converted into flats. The splendid glasshouses were once used to grow chrysanthemums and are now a clematis nursery. A few yards up the road towards llfracombe is a small lay-by once used by a stone-breaker. Here he would smash stone into small pieces for road-building, and pile it up for collection.

Lee Memorial Hall.
This was built in 1923 to commemorate those from Lee who had served in the, 1914-18 war. It continues to be a focal point for social life in the village. Outside is a decorative wrought-iron sign with the name of the village and the fuchsia emblem. The Bishop’s Stone is just behind the steps to the Hall. Carved on the top are the words “The Bishop’s Stone, here rested Henry of Exeter.” A bronze plaque gives a list of seven bishops known to have sat on it between 1833 and 1921; several others have done so since!

Victorian Pillar Box.
This stands tucked back in the lane beside the Memorial Hall at the entrance to Southcliffe Hall, a large house dating from the 1740s which was once the home of the Rev George Tugwell, vicar of Lee, expert on marine life and personal friend of the writer, George Eliot.

The Grampus Inn
This very old building was originally a farm, known variously as Lower Warcombe Farm, the Farm at Nether Warcombe, or simply the Old Farm. The grounds around the house were for many years a tea garden. In 1973 the owners were granted a licence to trade as a public house and in the subsequent years the building has been restored and the gardens laid out.

Chapel Cottage
During the 15th century there was a chapel here, dedicated to St Wardrede. In the 16th century it fell into disuse, after which it was used as a cowshed and store. It was rebuilt as a private residence in 1840, enlarged in 1925 and again in 1970. In recent years it has been developed as a tea garden.